We get it, advertisements are annoying!

Sure, ad-blocking software does a great job at blocking ads, but also blocks some useful and important features of our website. For the best possible site experience please take a moment to disable your AdBlocker. As with other Cubase plug-ins, the parameters of the Surround Panner window can be automated. Activating the Write button for a particular channel means that any changes made within the Surround panner are recorded and will be reproduced during playback if the channel Read button is activated. This includes movements of the panning ball, Centre Level slider or LFE slider. However, if you’re inclined to move sounds around within the surround field, editing the resulting automation data can require some patience. 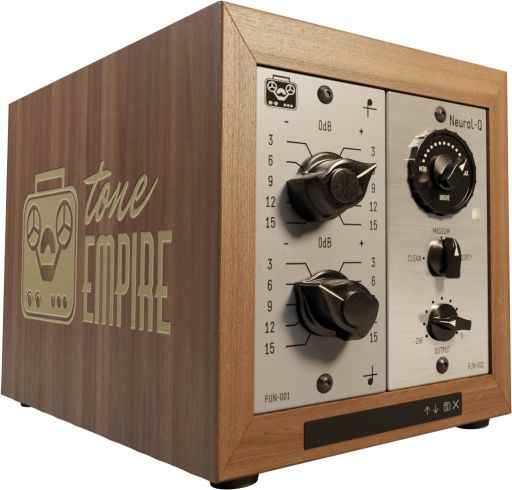 Hi Band:
This control boosts the high frequency of the program material in the shape of the original hardware that was captured.
The range is -15 dB to +15 dB

Lo Band:
This control boosts the low frequency of the program material in the shape of the original hardware that was captured.
The range is -15 dB to +15 dB

Pre-Amp Drive:
This controls is used for drive of the input of the analog pre-amp section. The more we use, the more saturated the signal.

Drive Type:
This provides 3 types of saturation for the Pre-Amp Module. Clean, Medium and Dirty. Don’t be afraid to push this plugin!

Drive on/Off Button:
This button can bypass or activate the pre-amp saturation module of the plugin.

Output:
This control is an output trim for the final signal after processing and the range is from -24dB to 0 dB. Autogain has been implemented in the pre-amp section for the convenience of the user.

Presets:
Some presets in a few categories have been provided to get the user started. 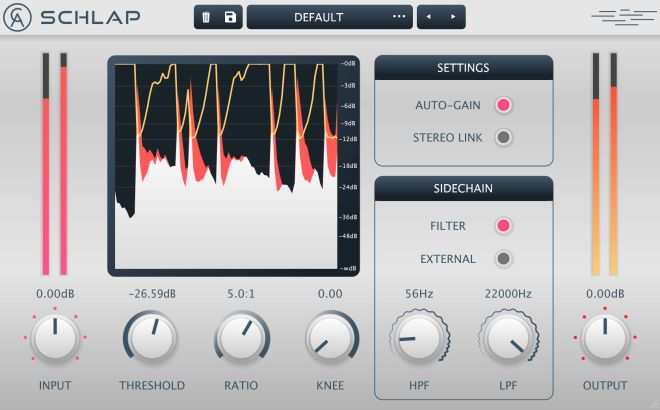 10 great plugins for your productions.

• Choric (NEW!!)
Thick and rich chorus textures with up to 32 voices.

• Beef
Powerful Distortion Effect to Beef Up Your Sounds

• Roast Beef
Christmas Distortion Effect to Beef Up Your Sounds 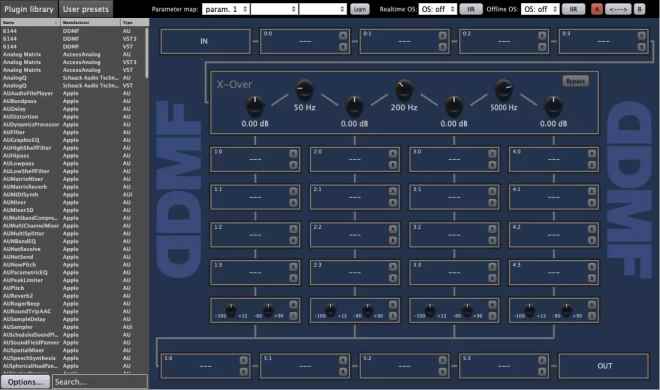 Superplugin is, in many ways, a complementary plugin to Metaplugin. Using the same elaborate plugin chaining under the hood, Superplugin is the right choice when you quickly want to create simpler chains (although the built-in 4-band frequency splitter isn’t exactly simple, of course…). With a few clicks you can populate the plugin slots with all your favourite plugins, whether they come in VST, VST3 or AU format. Superplugin handles the routing for you, everything is automated as far as possible. If you’ve always wanted to create your own custom plugin chains but have been somewhat overwhelmed by all the options Metaplugin has to offer, Superplugin is happy to help you out! As an additional bonus, Superplugin is also available as a standalone app for live playing of software synths & effects.

Features:
▬ 4 plugins in serial before a 4×4 multiband block, which is summed and fed into another 4 plugins in serial.
▬ Parallel section either in multiband or in fullband parallel mode.
▬ Easily move or copy plugins to other slots.
▬ Double precision audio processing when supported by DAW and plugin format (not for Audio Units).
▬ Convenient plugin organizer: scan your plugins once, then just drag and drop them onto the graph area.
▬ User preset section for cross-DAW preset management.
▬ Internal bridge from 32 to 64 bit and vice versa, with seamless plugin window integration: load 32 bit plugins in ProTools or LogicPro X without the need for a 3rd party bridging solution (for OSX: only up to Catalina!).
▬ For OSX: internal bridge to load non-native Intel plugins in a native Silicon host.
▬ Support for native Apple Audio Unit plugins.
▬ Standalone version: play software synths and custom patches without the need for a DAW
▬ Individual bypass for each loaded plugin.
▬ Full plugin delay compensation included.
▬ Automate up to 100 parameters by mapping them on any parameter of a loaded plugin.
▬ Negligible additional CPU overhead.
▬ Synths can also be loaded and played with any MIDI control, which means you can create custom synthesizers with existing building blocks.
▬ Up to 16 x oversampling during realtime playback and 64 x oversampling during offline rendering.
▬ Can be used as a VST (2 or 3) to AU wrapper, a VST (2 or 3) to AAX wrapper or an AU to AAX wrapper. 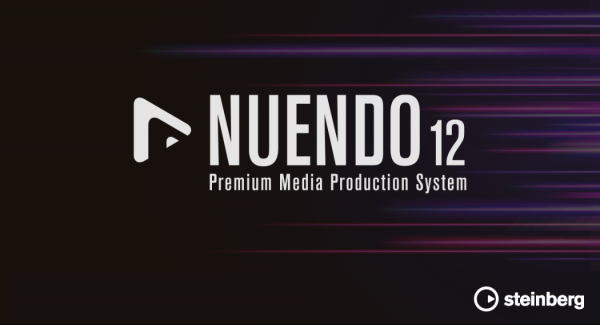 As the most advanced audio post-production solution available, Nuendo is the choice of film, TV, game audio and immersive sound industry professionals worldwide. Ever since its initial release, Nuendo has been a vital tool in creating the soundtrack to many high-profile productions, products and installations. Regular updates with new features, workflow improvements and additional, user-requested functions mean that Nuendo constantly exceeds the expectations of an audio workstation dedicated to audio post, with high end — often unique — capabilities that continue an ongoing revolution in audio and media production software.

HIGHLIGHTS
Clear speech is the most essential element in the audio narrative of streamed content, film and television. Nuendo 12 includes many new features and improvements to help make sure that dialogue is not only clearly heard, but sound designers and post-production studios can work as quickly, accurately and efficiently as possible. With headline new features for dialogue recording and editing, producing headphone-based binaural mixes and more, Nuendo 12 can truly be called the Home of Dialogue.

Auto-Align® Post support
The distance between lavalier microphones and the boom may vary as actors move around, shifting the phase over time. Nuendo 12 features seamless integration with Auto-Align Post 2, making time and phase alignment of continuously moving microphones much easier. Integrated as an ARA 2 plug-in extension, it is sim ply a matter of engaging Auto-Align Post and selecting a reference audio track. The process is non-destructive, with the original audio always intact and ready to be instantly recalled or reprocessed.

Even more editing improvements
o Nuendo 12 offers many new detail tools and shortcuts for audio event fade editing, including the new size with fade modifier key.
o You can now also use key commands to increase or decrease a range selection in all four directions, including moving the range selection itself.
o There is a new option to create or modify fade in/out length while resizing events by holding a modifier key and using the Select tool.
o You can now assign key commands for slip editing besides using the mouse and tool modifiers.

Dialogue Recording
As the Home of Dialogue, in Nuendo 12 we have paid special attention to the challenges of dialogue recording. Not only have we revamped the user interface of the ADR Taker, we have added new features and smart improvements, whether you are preparing for an ADR session, a language dubbing project for Netflix or using third-party applications whose scripts you want to import quickly and easily into Nuendo. These features will save you hours of time and make tasks less repetitive, radically enhancing your workflow.

Netflix’s TTAL dialogue script support
Nuendo 12 supports the import and export of TTAL files, Netflix’s proprietary script format for working on language dubbing projects. The TTAL script content is converted to record-ready ADR markers, including the dialogue text, characters and useful metadata, such as on/off screen notices, etc. Script change decisions made during the ADR production can be documented within the Nuendo marker editor and brought back to the workflow through the TTAL export function.

Immersive Mixing
Nuendo has always been at the vanguard of immersive sound mixing. It was the first application to implement a whole feature set for VR content authoring and the first DAW to offer complete in-the-box Dolby Atmos content creation. Now, Nuendo 12 takes another major step forward by offering the most comprehensive environment for binaural mixing with headphones. And with new improvements to volume automation, remote object panning, spatial monitoring and more, Nuendo 12 is the application you need for every immersive mix.

Headphones Match
When listening through headphones the sound is affected by many factors, including intended use build quality, materials and more. To truthfully judge the frequency and spatial domain of binaural content on headphones, a neutral frequency response is vital. The Headphones Match plug-in uses an FFT-based spectral operator to apply an accurate compensation curve to the monitor output for 387 different models of headphones from a hundred manufacturers. It is measured in a controlled, identical environment with more than 500 frequency-points per curve. You can also emulate the sound of a different pair of headphones within this plug-in.

Sound Design & Music Features
Nuendo 12 comes with enhanced features for sound design and music. There are new and improved FX plug-ins, better integration with external controllers and, of course, all the music features of Cubase 12. This ensures Cubase projects will work seamlessly in Nuendo, with no loss of data or audio information when crossgrading.

Workflow and Productivity Improvements
Whether you work in film, television, game audio or any other audio discipline, we are always listening to our Nuendo users to learn about the new features and improvements they need in the world’s leading sound design and post-production software. Nuendo 12 includes several user-requested updates which will improve the workflow and productivity of a wide range of different tasks throughout the application.

EVEN MORE IMPROVEMENTS
Smooth waveform drawing
Waveform drawing is now much smoother, making it easier to look at and to edit audio with pinpoint accuracy.

Performance improvements
We have upgraded Nuendo’s performance for navigating and zooming within large projects, making it faster and snappier than ever before.

New Nudge Cursor key commands
Key commands can be assigned to jump backwards or forwards by 5, 10 or 20 seconds in the timeline.

Audio Event display options
There is a new preference to show or hide the audio file name in addition to the selectable attribute. The clip name (generally the file name) is displayed beside the selected event attributes in brackets.

Independent Grid Settings for Nudge edit operations
You can now decouple editing operations using Nudge commands from the Snap/Grid settings, letting you work with a bars/beats grid for mouse-based editing, but the Nudge key commands to adjust positions and lengths.

Changes December 1, 2022:
– We have just released a new 12.0.52 maintenance updates for both Cubase and Nuendo that fix the MIDI Remote issues that were unfortunately introduced with the 12.0.51 hotfix. There are no other fixes or improvement in this release. Do you want to start creating your own music, bring your production up to a professional level, or streamline your workflow for short deadlines? Whatever you need, Cubase helps you to reach your full creative potential. From Hollywood blockbuster composers and Billboard Hot 100 producers right through to keen beginners, the world of music production trusts the comprehensive feature set, straightforward tools and unrivaled sound of our acclaimed music production software.

Changes December 1, 2022:
– We have just released a new 12.0.52 maintenance updates for both Cubase and Nuendo that fix the MIDI Remote issues that were unfortunately introduced with the 12.0.51 hotfix. There are no other fixes or improvement in this release. 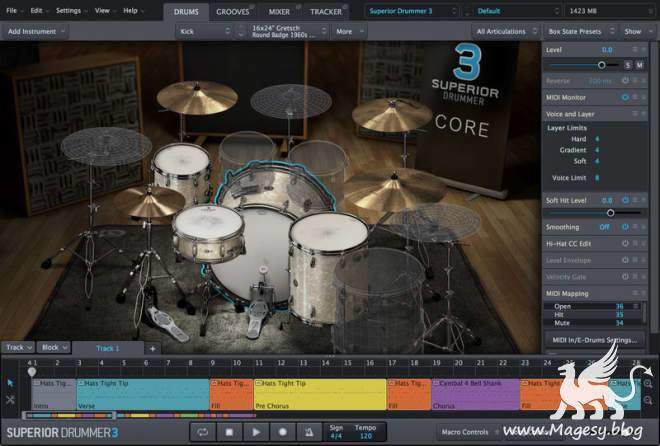 In addition to a massive library of raw sound material, Superior Drummer 3 introduces a unique design*, a streamlined workflow and countless features for powerful drum production in your computer. With Superior Drummer 3, you have control and creative power beyond the imaginable. Welcome to the future.